An Android without Gears?

Google released the first preview of Android today. It is chock full of features and a great emulator, but there was one interesting omission.

Beyond what has been covered elsewhere, there are many attention-grabbing features for mobile app developers:

High-quality messaging, local data storage, camera access, and location information create the base for truly revolutionary applications. Such power is not without potential for abuse. Imagine a Starbucks locater that would fire off an alert anytime a phone got within 100 yards of a Starbucks. A SQLite database would hold store locations and XMPP messages would keep the application aware of newly opened stores. Anyone traveling through a major city with such an application would be inundated with an unending stream of beeps and or vibrations. 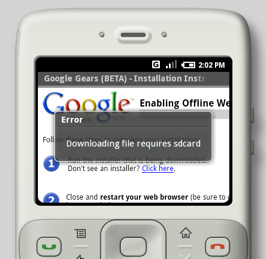 Building apps using the Open Web with the Android browser looks to be comparable to the Safari version shipping with today’s iPhone. Unfortunately, Google Gears does not appear to be part of the WebKit browser included in the first release of the SDK. Accessing the Gears demo prompts users to install it. The install page results in the error pictured here.

Native Gears support in the browser would be a huge advantage to web developers targeting Android phones. Big challenges to mobile web application development are low network speeds and intermittent network connectivity. Google Gears and Dojo Offline go a long way towards solving both problems–especially if users are automatically taken on and offline as needed.

Overall, the Android SDK is very impressive and much more than a press release. Steve Ballmer may just have to eat his words yet again. Between Apple’s forthcoming iPhone SDK and the release of hardware running Android, 2008 could be a watershed year for mobile development.