For the dgrid 0.4 release we added a new demo and helper utility, the dgrid Laboratory. This is more than just a demo, as it allows you to quickly explore and build different dgrid configurations, returning boilerplate code for efficiently including dgrid within your application. Although not every possible configuration is supported with this tool (sub-rows, column sets, and compound columns), it is very useful for visually generating complex base configurations for use in your applications. The dgrid Laboratory itself was built using dgrid as well!

The left panel of the dgrid Laboratory allows you to select and modify the grid’s configuration. The right panel provides a preview of the grid as well as generated code. These right panel tabs are updated in real time as you make modifications to the dgrid options in the left panel.

The Columns tab in the left panel can be used to define the columns for your grid. To create a new column simply:

As its name implies, this tab provides a list of various grid features that you may apply to your grid. Some features may not work together (e.g. Pagination and OnDemandGrid), so features may be automatically deselected to prevent failures or redundancy in the demo grid.

The following grid features are currently available within the dgrid Laboratory:

Similar to each row in the Columns tab, most grid features have a gear icon to edit the configuration for that feature.

The Column Features tab provides a list of various column features that you can apply to your grid. Column features are still just mixins and extensions like grid features, but focus on adding capabilities to one or more columns. Adding a column feature will expand the level of configuration possible for each column in the Columns tab.

If you haven’t already used dgrid, this is a great way to explore these features and familiarize yourself with its capabilities. 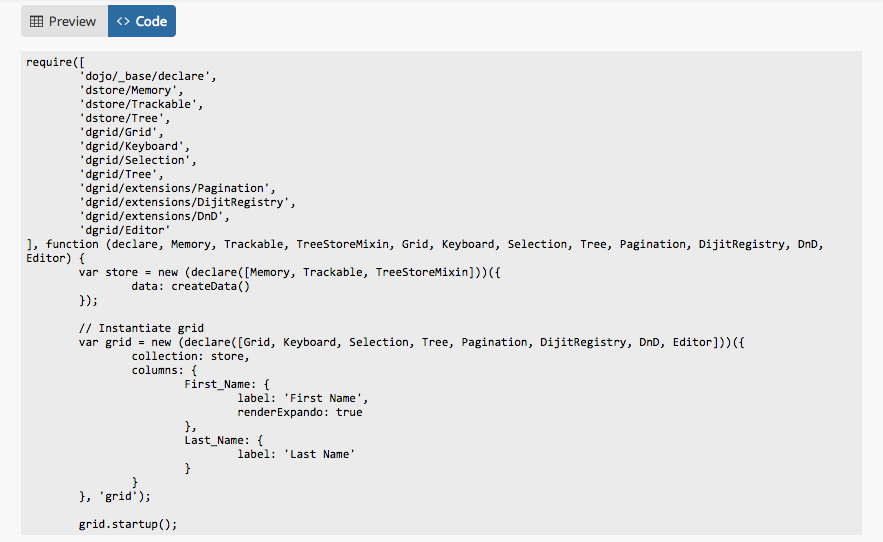 Using the Output in Your Application

Now let’s take a look at how to use the output from the Code tab within your application. First, we recommend a simple directory structure for your project as follows:

Simply paste the output from the Code tab into the script tag at the bottom of grid.html and you will see the same grid as in the preview tab of the dgrid Laboratory. A great next step to exploring is making your own modifications to grid.html and seeing how you can use the generated base configuration with your own real application data.

If you’re not sure where to start with dgrid, SitePen can help! You can start by attending our Dojo 201 workshop. If you need assistance building your own custom grids or dgrid extensions, contact us for a free 30-minute consultation to discuss how we can help.