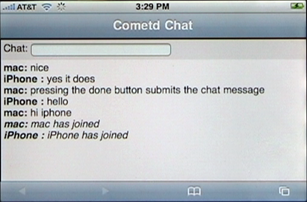 Many people are perplexed by the absence of instant messaging on the iPhone. Apple has done great things for SMS with their ichat styled interface. Unfortunately they stopped short of providing a seamless IM experience. Hopefully Apple will add these features in a future software update.

The iPhoneDevCamp in San Francisco last weekend saw several groups working to fill the IM gap by building iPhone compatible IM web applications. I spent part of my time there revising the existing cometd chat app to work well on the the iPhone. Comet’s long-running http connections are ideally suited for chat apps as it provides very low latency. We had already tested cometd on the iPhone, so I was encouraged about the ease of porting the existing chat demo.

I started with the existing dojo 0.9 chat app. It functioned on the iPhone without modification. However some changes to the user interface were needed to make it usable on a small screen:

Check out the live demo of iPhone chat. Because the iPhone does not currently offer a mechanism for screen or video capture, the movie was was recorded using mini-dv mounted on a tripod. If you plan on doing a demo of your app on a iPhone or other mobile phone to a large audience make sure to use a camcorder mounted on something solid.

Hopefully Apple will release a fully integrated IM app into their existing SMS app soon. Until then low latency http solutions like comet will help fill the gap in the iPhone application suite.