Picture this: 100+ developers and their phones and laptops making crashing noises playing a live-created clone of Flappy Bird. Now picture the same devices working together to create a live MIDI concert, followed by a challenging and fun JavaScript pub quiz.

All of this happened at HalfStack, a one-day JavaScript conference organized by the London Ajax User Group. For over five years, London Ajax has organized monthly meetup events, followed by more discussion time in the pub. In the spirit of London culture, the conference was hosted in a Shoreditch area pub at Corbet Place Bar & Lounge (in the former Truman Brewery). 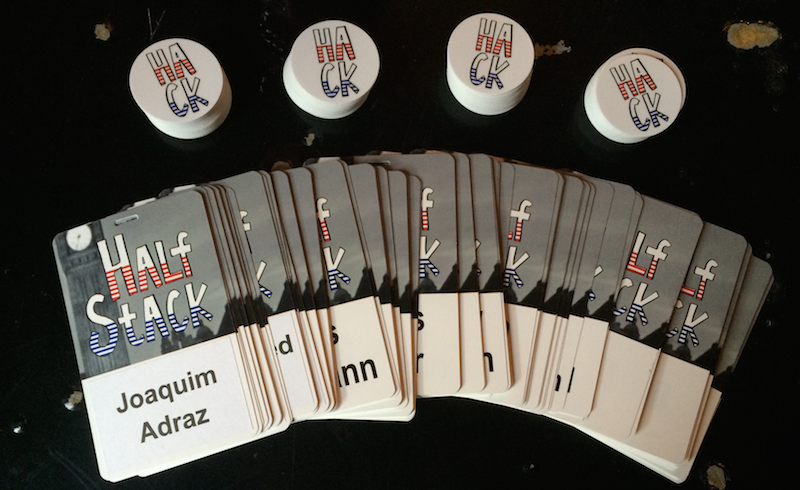 HalfStack selected a number of great speakers, with a nice mix of highly technical talks, inspiring talks, and demos of new approaches to building software. In the words of one attendee:

Pubs are probably more acoustically challenged than most venues, so the diverse mix of 30 minute talks kept the event flowing at a great pace.

The conference had a casual yet fast-paced flow, with food trucks available for snacks in the courtyard, and beverages from the pub. 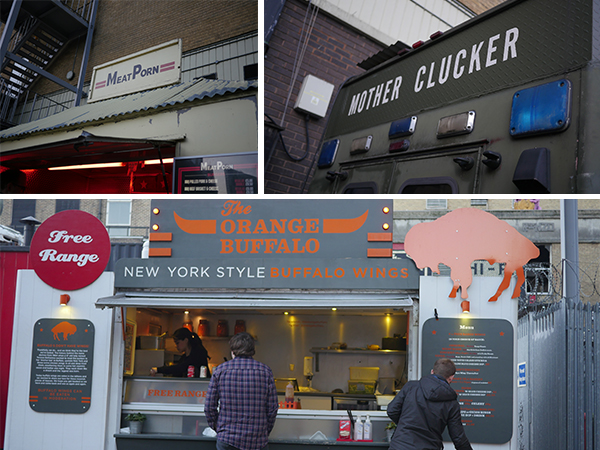 After a brief welcome to the conference, Jonathan Fielding opened the event with a talk about the critical path to JavaScript performance. He emphasized the bottlenecks that are common to performance for consumer facing websites, and the topic became a common thread within other speakers’ talks. One of the primary benefits of a single-track conference is that the speakers often incorporate points made by others into their own discussions. At least four of the other talks made a reference to Jonathan’s point about the critical path to performance! 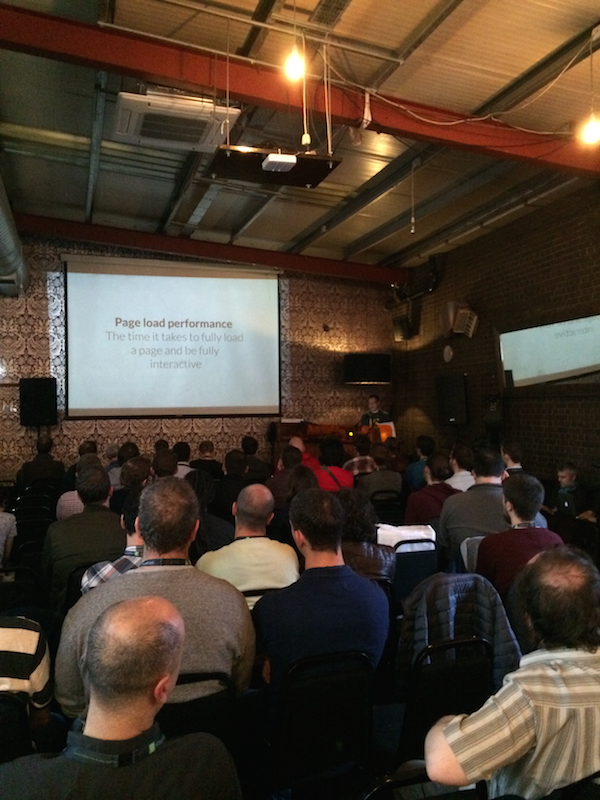 Michael Carter (Weeby.co) then followed with an incredibly impressive demo of js.io, an app and game development platform. Leveraging a browser-based editor and command shell linked to a remove development environment, Michael walked through the steps to create a real-time game with animations, sound, and physics logic. He used JavaScript, with compiled versions optimized for the web, iOS, and Android that the audience could download and use in real-time. It was pretty amazing that the conference wifi survived unscathed! 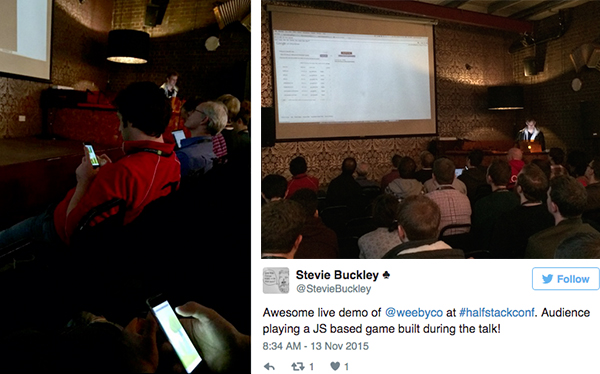 There was then a short break before the next round of speakers.

James Milner (Esri UK) then took the stage and showed techniques for building 3D applications, leveraging WebGL with three.js, along with a combination of Esri’s mapping technologies. James concluded his impressive talk with a feature using Twilio where everyone in the audience could send a text message of their favorite city, and the demo application would move around the world in 3D to that destination. 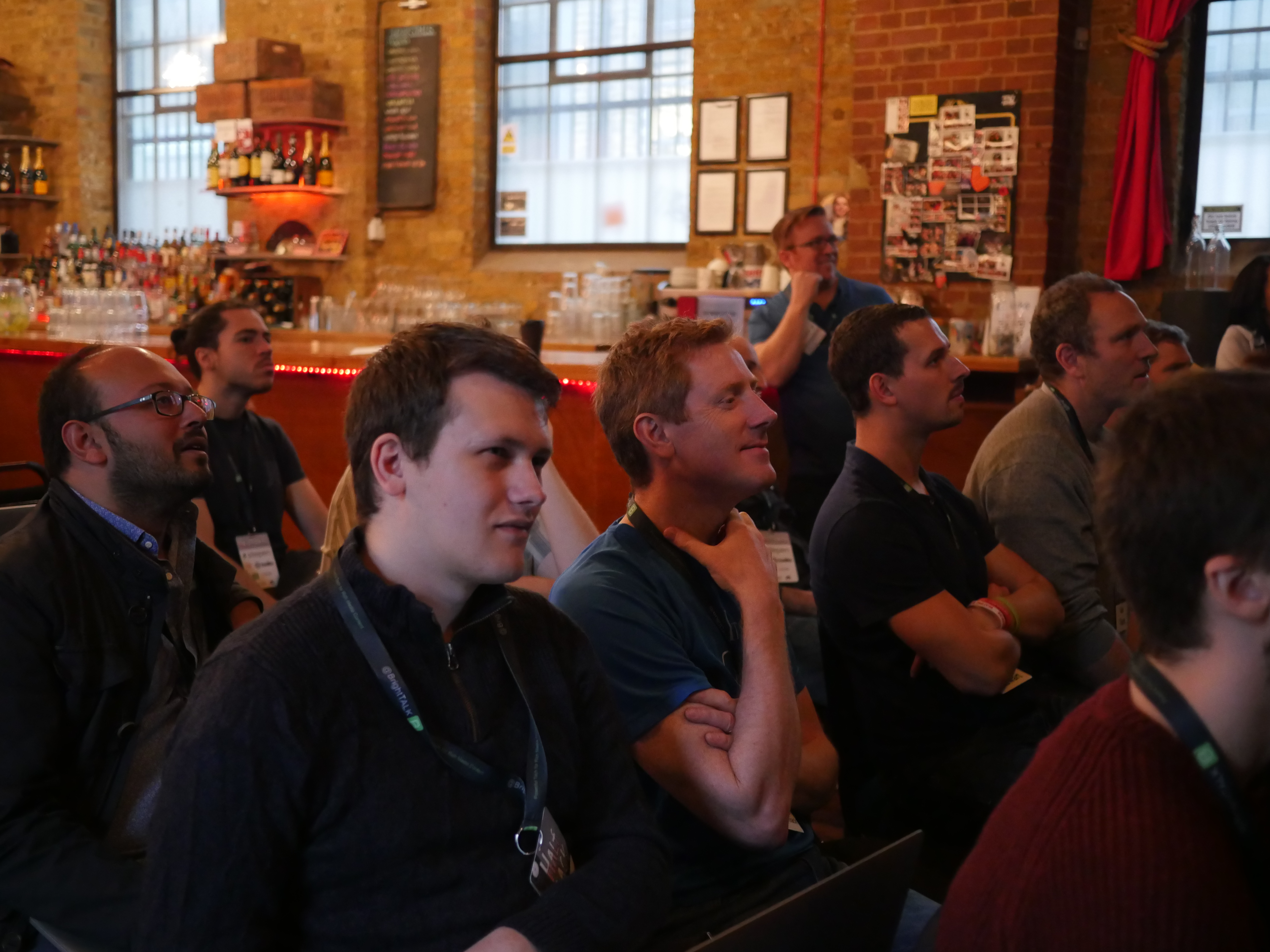 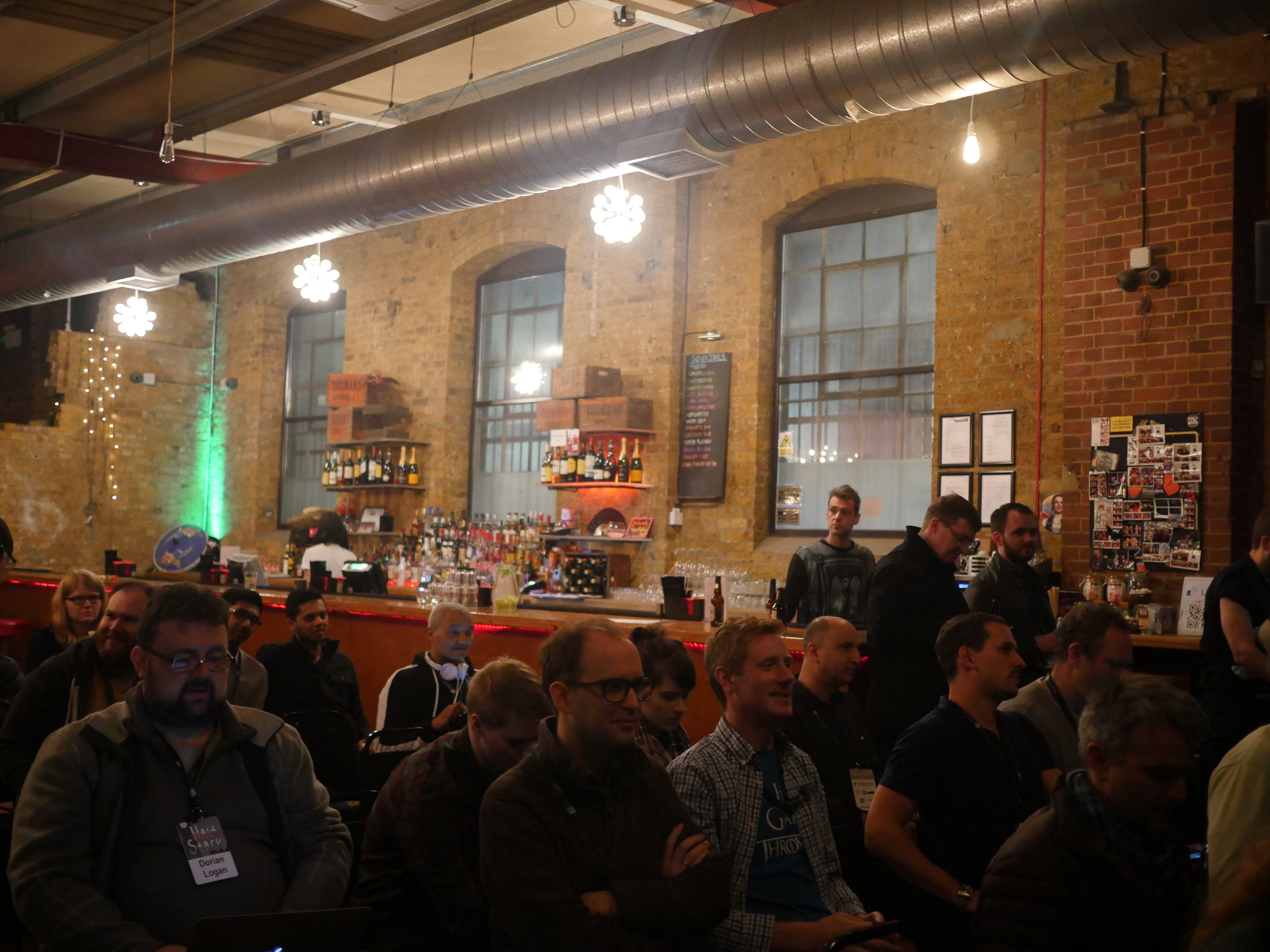 Chris Heilmann (Microsoft) then gave a very fun and inspiring talk, “May vs Moore – Computers get faster, we can fix that!”. Chris talked through a series of examples where no matter how fast computers and platforms get, we always seem to find ways to take advantage of all of this performance, and then some. 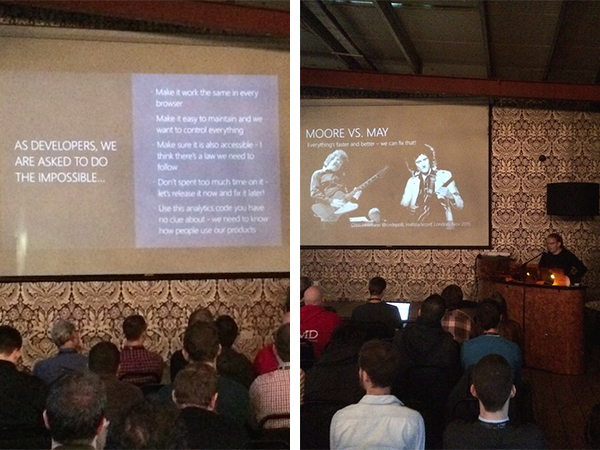 Remy Sharp then took the stage for his inspiring yet depressing talk, “The toxic side of free. Or: How I lost the love for my side project”, which covers all the things that can go wrong when you try to give something away for free in order to make the world better. His talk ranged from calls from the police regarding malicious users to dealing with the EU’s entrepreneur unfriendly VAT MOSS program. 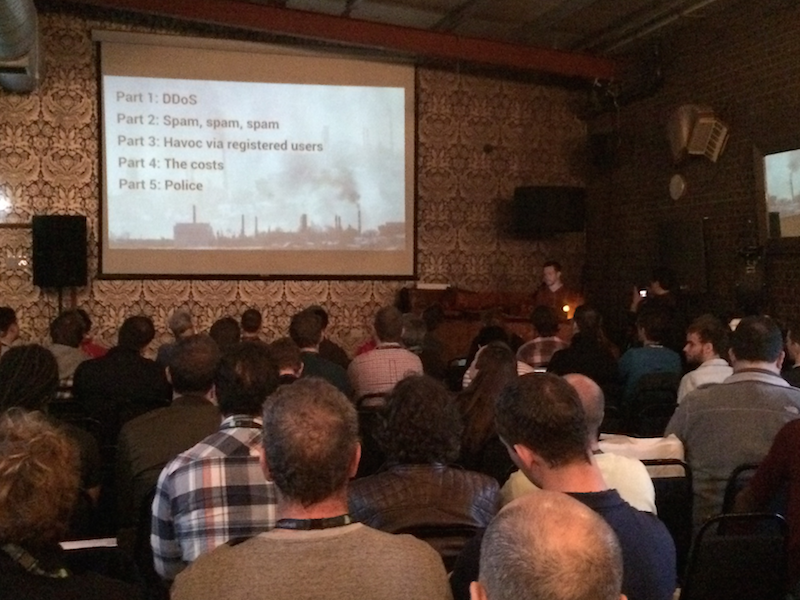 After another short break, Forbes Lindesay (Facebook) gave a very in-depth talk about the patterns of React, Flux, and Redux, and generalized their usage beyond React. 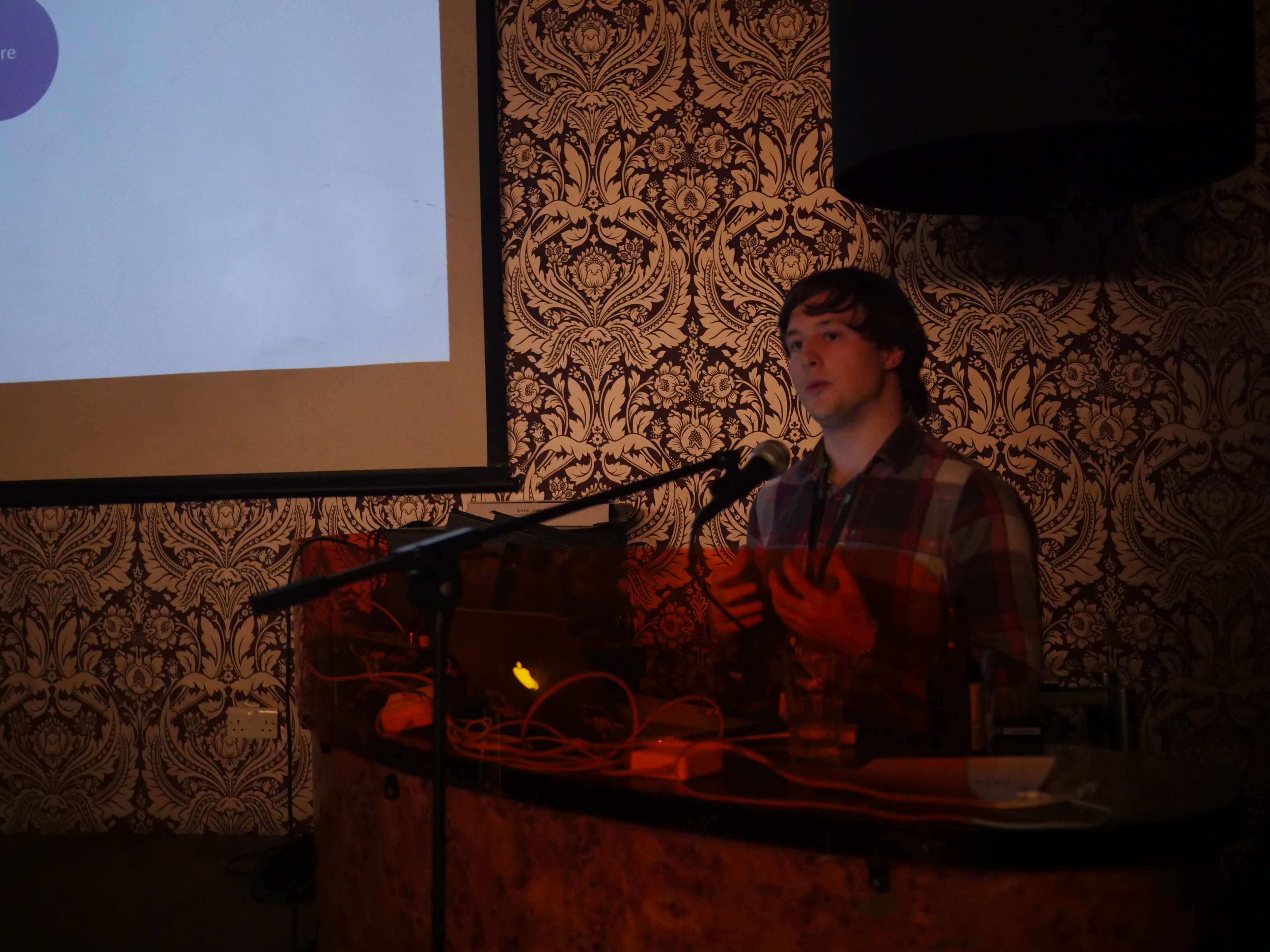 Ruth John then revealed the MIDI-powered app she created for the conference. After a fun history of MIDI APIs dating back to 1983, Ruth had the attendees browse to an app that contained a pair of music controls accessible from your mobile device, creating a giant crowd controlled music performance.

I (Dylan Schiemann, SitePen) then closed out the conference with a talk about the lessons we’ve learned at SitePen over the past two years using TypeScript and ES6. This talk is a quick introduction to our two-day ES6 and TypeScript fundamentals workshop.

While the main conference was over, it was time to head to another venue for the conference afterparty, the Hoxton 7, located about 10 minutes away. 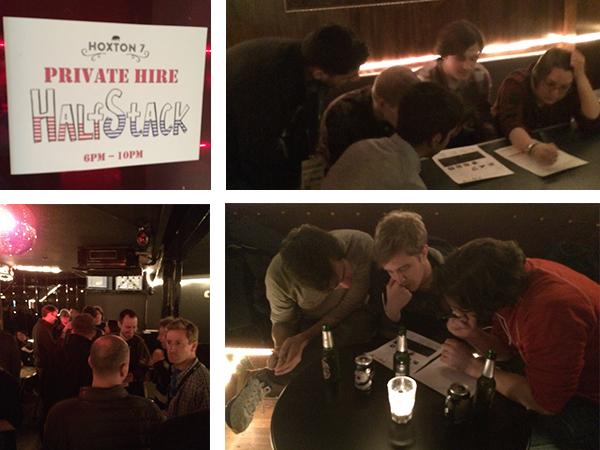 A major highlight of the afterparty was a proper pub quiz, with some of the most challenging JavaScript questions created by the conference speakers, as well as our very own Kit Kelly. The conference was made possible by a great group of sponsors, and SitePen had the opportunity to proudly sponsor the pub quiz! 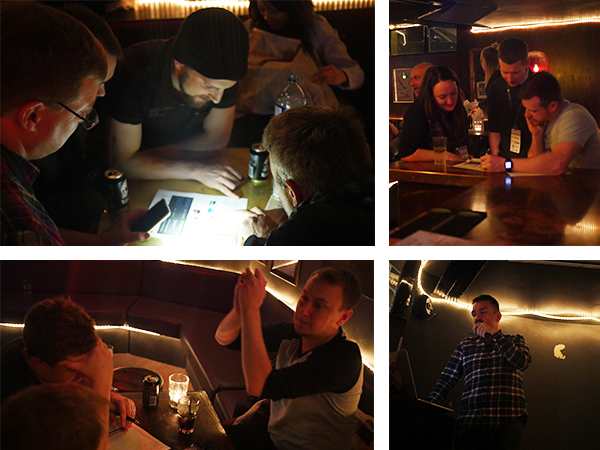 My favorite question was one where you needed to guess the name of various frameworks and toolkits:

Overall, HalfStack was a really fun JavaScript conference with exposure to a variety of interesting and emerging trends. There were enough interesting quirks and twists to keep everyone engaged all day, and I’m already looking forward to next year’s event!

*Oh, the answers for the two pub quiz questions above were angular and ember (as in M-brrrr). Did you guess it correctly?