I recently attended Nodevember, a two-day JavaScript conference down in Nashville, TN. My love for JavaScript motivated me to take my attendance a step further and volunteer. As a meetup organizer, I know how much work it can be to put on a small event, and it was exciting to see what goes into hosting a large conference.

If you’ve never been to a developer conference or meetup–go. If you have been to one of those events and haven’t volunteered, I’d recommend offering your services. Organizers want and need your help and input as that’s how groups continue to work, grow, and better serve their communities.

I came down here with another developer and fellow volunteer, Jake. When we got into town we wanted to see what the kick-off party had to offer and I must say, it was fantastic meeting new people and seeing a few familiar faces as well. I briefly met the organizers of the conference and had a great conversation with one of the speakers. If you do decide to go to a conference in the future, be sure to participate as much as possible and take advantage of meeting new, awesome people!

At 6:30 a.m. I was up and at ’em. Yes, this is earlier than I’m used to on a weekend, but coffee does wonders in the morning, ya know? When Jake and I got to the conference venue at the beautiful campus of Lipscomb University, we helped to hand out badges in the registration line and then it was off to the conference!

Opening remarks were conducted by Will Golden, the conference’s main organizer. It was a fantastic turn-out for a second-year conference, and excitement filled the air! Yehuda Katz gave the opening keynote about Ember and left with a very positive note. The main points were less about Ember and more generally about frameworks and making use of tools that empower more people. Frameworks are about taking the boring stuff, wrapping it up, and being able to do the non-boring stuff however you need.

After the opening keynote, I started my room monitor duties by assisting speakers and the rooms they were in, and then it was onto the other sessions.

There were four tracks each day with quite an impressive list of speakers! My day’s agenda looked something like this:

Both Elijah Manor and Damian Schenkelman handed out a significant amount of information in such a short session. Elijah had lots of actionable takeaways for writing cleaner code and improving one’s tooling process. Damian spoke with a great deal of authority and experience, as what he does entails scaling APIs to a much larger degree than most developers I know. 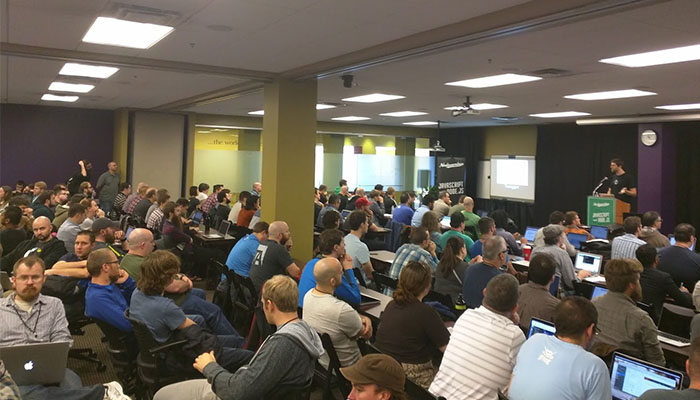 Next, I got a huge takeaway regarding ES6/ES2015. Ben IIegbodu and Nicholas Young gave great overviews of some of the more popular features of the latest iteration of the JavaScript language. And Rebecca Turner, one of NPM’s CLI maintainers, talked at length about the details and frustrations of building a package manager. This was incredibly enlightening and I have to say here, thank you Rebecca for the work you do enabling millions of developers to use such a vast library of software!

The last talk I attended on Day One was given by Chris Keathley, an interactive visualization developer and self-styled data scientist (though he would hardly cop to that title). He showed a great deal of understanding of working a story out of a data set. This knowledge and aptitude definitely shone through in his talk. It was especially a pleasure for me to see this since having some small newspaper background gave me a great appreciation for folks with his experience and talent.

Ed Finkler closed out the day with a very compelling and moving story about his own struggles with mental health issues and what we as developers can do to mitigate our own issues and those of our colleagues. Ed has started an incredible movement making mental health resources open source and freely available for any company to pick up and implement in their workplace.

Overall, Day One consisted of a large number of technical talks by experts in the field.

After the first day, we were on a roll! I had no other volunteer responsibilities (except to help break down at the end), so I just got to enjoy more awesome talks. Once I downed a healthy portion of biscuits and gravy for breakfast, my agenda was as follows:

Delivering the opening keynote of Nodevember Day Two was Soledad Penadés, a developer with Mozilla. Soledad brought a great deal of experience and optimism to the dreary and under-discussed topic of developer burnout. One of the coolest takeaways from this talk was her relation of the body to cultivated farmland. She made the point that sometimes we need a rest, as a farmer would leave their field fallow for a season, to recover and better produce.

Following the opening keynote, I went to a talk by Microsoft developer, Stacey Mulcahy, who was talking at length about lowering the barrier to entry to physical computing with Node. After that, I heard Guillermo Rauch, who spoke about real-time collaborative communication. This idea is long-lived but not yet implemented in a way that he envisions in the web.

Aimee Knight’s session was about overcoming fears as a junior developer, from both the junior’s perspective as well as that of the team! This was a fantastic talk that I think every junior dev, everywhere, should watch. Some good takeaways include: “practice makes permanent” and “one thing at a time”.

Next I saw Max Beizer, of Heroku, give a neat overview of the Phoenix Framework and its native WebSockets implementation. Don’t do a live demo that people in the audience can access unless you have input sanitization! This looks pretty cool though—very simple to get a chat application up and running with Elixer and Phoenix!

The last two talks I saw before the closing keynote were amazing and even better in tandem. First we had Donovan Buck talking about Johnny Five Animation and giving probably the coolest demo of the conference, where he made a hexapod robot walk by waving his hand in various ways over a Leap Motion controller. Super exciting, super creepy. Then Jason Orendorff from Mozilla spoke of Alternate Futures, or how to build a simple AI. We went through building a tic-tac-toe game by walking over the Galactic Time Squid, Jason’s name for the shape of the future.

The conference ended with Douglas Crockford talking about his ambitious new project he’s calling the Seif Project (pronounced “safe”). It’s a ground-up rebuild of the web where he hopes to make use of JSON for data transfer and the Qt library for user interface, built with security in mind. Before passwords, computers were secured with men with guns. This model was never designed to scale. We’ll see what the future brings!

If anyone is interested, you can watch many of the Nodevember Conference talks, as most are already available. Great job, organizers and video folks! All together, this conference held a great deal of technical promise as well as the type of community for which I got into this industry. We are an inclusive, committed, empathetic, excited, talented, and wonderful bunch of people. If you have a chance, definitely check out Nodevember 2016. I’ll see you there!