Day 2 of the Lead Developer Conference continued with a series of excellent talks. Be sure to check out the Day 1 recap if you missed it.

Michael is the VP of Engineering at Slack and known for Rands in Repose. He gave the talk Leadership. By the Numbers which included a fun series of tips and suggestions to improve as a development lead. 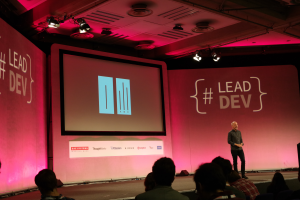 Michael explained that you need to say the difficult things, in order to make sure someone fits in. Meaning that if you avoid addressing issues, the engineer will not succeed within your organization. A recurring theme of the conference was to give feedback early and often, rather than waiting for annual or semi-annual review.

If you want to grow your organization, you need to bring different ideas into the discussion so you don’t just get a bunch of people agreeing with you. This allows your team to challenge assumptions and creates better results.

As a leader, you set tone and cadence all the time. The words you use to express ideas and give feedback are key in building a strong team. One example provided was to start and finish meetings on time, to show that you respect the other people in your organization.

No one is perfect at everything, and it helps to admit that you’re bad at something that’s not your super power.

Michael summarized key leadership factors as leadership as vision, execution, and judgement. Leaders provide vision by describing a compelling future, and that it is pleasantly achievable. This vision could be yours or someone else’s, but you cannot lead without vision.

Strategy and execution were described by Michael as following a spectrum, with strategy being the path to the vision, and executions being able to read the signs and define and follow the steps to get to that vision, while avoiding pitfalls that might get in the way of the vision. Michael challenged the audience to determine if their were stronger at strategy or execution.

Finally, judgement was defined as the deployment of principles to achieve vision along the way, and consistency in applying these values so that your team understands how to succeed within your organization.

In addition to these valuable leadership principles, Michael gave us some additional gems:

Michael offered a great talk for anyone that finds themselves working with an engineering team.

Ryan delivered a lightning talk on Hacking verbal communications, going through the motivation on using a series of hand signals to provide feedback without disrupting the flow of a meeting. These hand signals were used as part of the Occupy movement, and Ryan explained how they can be used to make meetings more efficient, especially in large groups. Ryan reminded the audience that conversations are an exchange of ideas, and having additional feedback mechanisms can enhance the exchange of feedback. 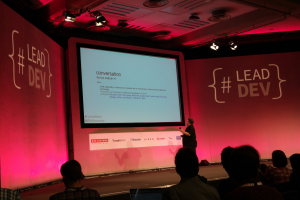 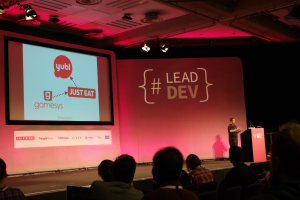 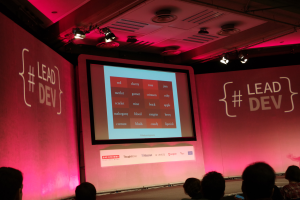 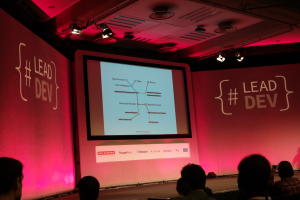 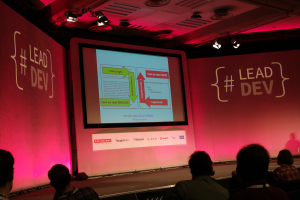 Yan also explained some of the benefits of Type Driven Development (TDD), namely that it is an approach that encourages the expression of intent with your code. Somewhat surprisingly to me, Yan did not cover TypeScript, presumably because he focuses his development efforts on many other languages such as F#, Rust, and Elm. 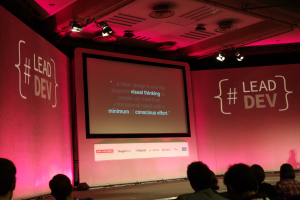 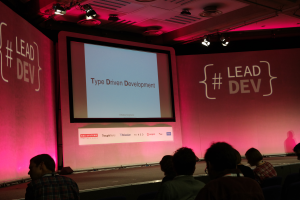 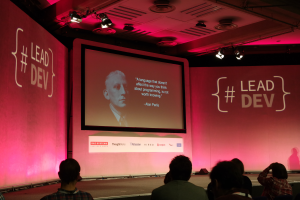 Crystal spoke on Addressing imposter syndrome, an issue where someone does not believe they are as capable as they are, and believe themselves to be an imposter that will eventually be discovered as a fraud. Crystal explained that people developing new skills constantly suffer from this challenge. The talk explained some techniques to overcome this, but also some things we can do in other parts of our work to minimize this challenge. For example, she explained that people who may be more than qualified for a job may never apply for a position. This will typically happen when there’s a lengthy list of requirements, and the candidate will feel that by not meeting even one requirement, that they cannot be qualified for the job. 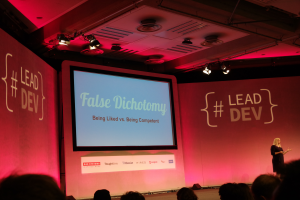 Crystal also challenged the audience to consider how gender and other factors can impact imposter syndrome. And she reminded us that what appears to be success on the surface often overshadows all of the challenges and doubts that lead to that result, much like an iceberg is mostly hidden from view. 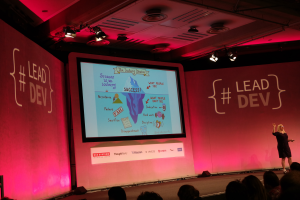 Gil shared his experiences in how to not burn out your monitoring team. While many of his points were specific to monitoring systems such as networks and servers, his points are also more generally applicable.

For example, if you do not make time to fix ongoing issues that are causing major problems or wasting significant amounts of time (e.g. technical debt), then your team will burn out as they will not have time to be efficient and instead will always be fixing crisis problems. Also, many businesses make every small issue a major crisis, and have systems in place that increase stress levels. He played the red alert sounds from Star Trek as an example. 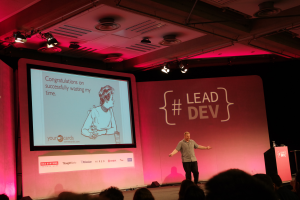 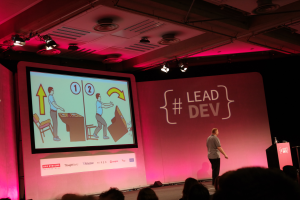 He also explained that alert fatigue, which he compared to the boy who cried wolf, can overwhelm a team. He emphasized that alerts should only be for real symptoms, not suspected causes, and only for actionable causes, and that break the business. Otherwise it is impossible for someone to know where to focus their efforts if everything is perceived as a top priority crisis. 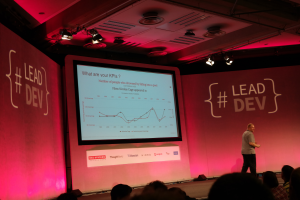 Monika leads an increasingly large group of front-end engineers, and provided several Lessons from leading a growing team. My biggest take away from her talk was to show people on your team what you do, and make space for them to try that out. Her particular example was focused on leading developers, but I think this could also apply to other parts of the business. Otherwise, people within an organization get a very isolated view of the business, and if they find themselves in an alternative role, it’s unclear to them how they can help. Monika also talked about approaches to leadership style, comparing the spectrum of hands-off to micromanaging, and finding the sweet spot that works for you and your team. 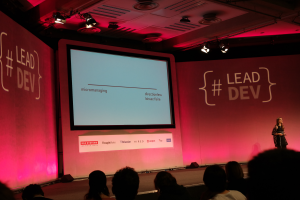 Thomas works for Amazon after his startup was acquired by them. He talked about working backwards from the customer, meaning that it helps to start with what a customer needs, and then figuring out what to build. Amazon is a champion of this process, and Thomas spoke about how this process plays out in practice, from limits on the size of teams (the Amazon two pizza team rule), and how to align goals and share a vision. He talked about how user stories from a typical agile process are a good start, but are often insufficient in capturing exactly wha the user needs and why. 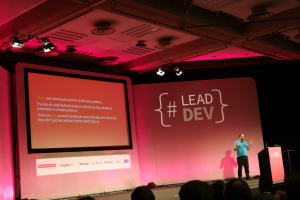 Penny delivered a lightning talk, Overhead, not downtrodden. She talked from her perspective of leading a QA team, and how instead of trying to justify that their team is not just overhead, to embrace that and aim to reduce the number of bugs within an organization by increasing the emphasis on quality to begin with. This happens through better tools for automated testing, better code style guidelines and reviews, and keeping everyone focused on code quality. I found myself nodding yes throughout this talk, as these are principles we emphasize for building better web applications.

Melinda spoke on How to succeed at hiring without really trying. Her talk emphasized the things organizations can do to provide more insight to the outside world on the reasons why you would want to work at an organization. For example, your entire team can do awesome stuff and then you share it with the community. This will help you reach potential hires organically, so you may hire good people, and then repeat this feedback loop. She also spoke on various strategies that a leader can use to encourage this, and emphasized that not everyone will be strong at all facets of this. For example, if someone is not currently strong at writing blog posts, you can maintain an internal blog post so there’s less pressure to make something perfect, and the team can provide feedback. Or you can author public-facing blog posts in pairs, so quality may be achieved more quickly. She also emphasized the teaching of story telling, which helps explain ideas to the world. 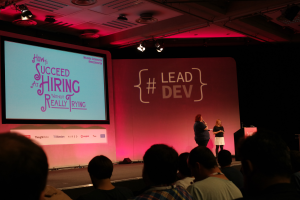 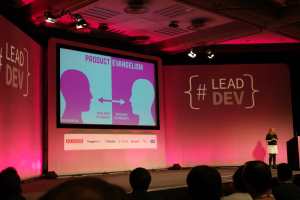 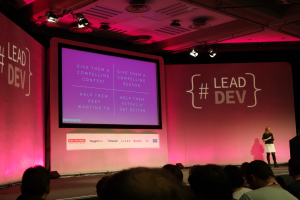 Melinda has also published a follow-up blog post about her talk which goes into further depth on many of the points she made during the conference.

Laura spoke about How to deal with the culture divide and internal advocacy within a distributed team. This talk felt very familiar to me, as SitePen works completely remotely. She emphasized some of the differences in working remotely with teams that work in person, and information not being captures from water cooler chats. She also talked about some of the challenges with time zones, international differences in culture, and strategies to avoid being on-call at all hours of the day. Laura also emphasized how the small talk at the start of meetings is often more important than the agenda of meetings themselves, as this small talk allows your team to build up bonds over time, even when remote. This is something we also do at SitePen. I strongly encourage anyone that works with a distributed team to watch the video from this session, as the talk was filled with useful suggestions and tips. 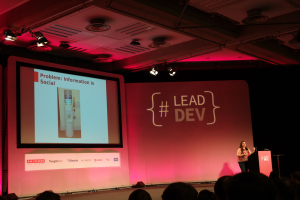 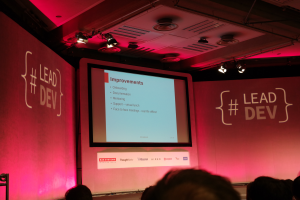 Camille finished the conference with a talk on Rebooting culture. Probably the more humorous take away from this talk was that a good manager is able to “Keep the people who hate you away from those that are undecided”, a quote from Casey Stengel. Camille talked about some of the mistakes she’s made in being too demanding or not communicating effectively with teams in the past, and strategies for motivating a team. She also authors a nice tech leadership blog, covering topics such as the virtues of laziness and impatience and strategies for take home interviews. 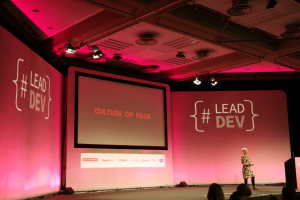 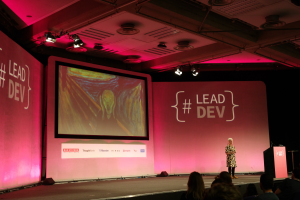 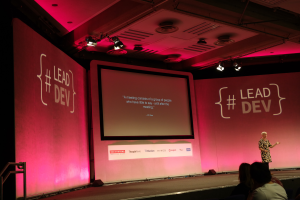 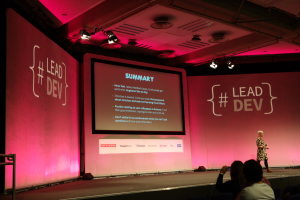 The conference organizers announced that in addition to their annual London event, Lead Dev will they will also be coming to New York next February. I strongly encourage anyone interested in learning more about tech leadership to attend.

Toby Osborn has also assembled a further reading list based on the event, listing many of the resources mentioned by the speakers during the conference.

After this event, I was left with many ideas. I was left encouraged that we do many things well, and also received a number of thoughtful ideas for things we can do better. As a team, we’ve learned a lot over the years, in particular in the following areas:

We may start blogging more about some of these ideas, or perhaps I’ll propose a talk for one of the 2017 Lead Dev conferences!