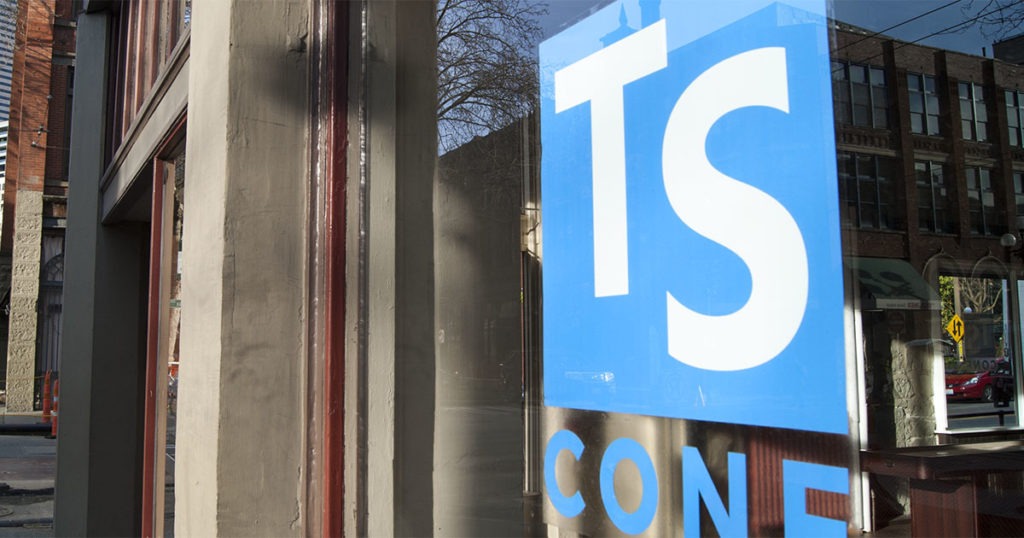 In case you missed it, SitePen was the presenting sponsor of the inaugural TSConf which took place in Seattle on March 12, 2018!

In 2017, we met the TypeScript team in person after years of being avid members and contributors to the TypeScript project. We asked them when the first TypeScript conference would be and they answered with: “Do you want to do it?”

SitePen, along with various members of its team, has organized community meetups, sponsored conferences and have, of course, been speakers at many events, but this was the first time we had ever considered tackling an entire conference from start to finish. How difficult could it be? To make things even more exciting, we kicked off our foray into conference management by boldly announcing TSConf just two months before the event. Who wanted to wait six months for a TypeScript Conference? Not us!

With the goal of bringing the TypeScript community of creators, contributors, and evangelists face-to-face for the first time, we dedicated ourselves to creating an environment that would give us the best chance at a fantastic experience for all involved.

Then we chose the exposed brick, historic hardwoods and open spaces of Axis Pioneer Square to set the stage for our event and with their team’s help and guidance, we engaged the support of Ravishing Radish and Blue Danube who teamed with us to provide catering and audio/visual production, respectively. All three of these companies earned rave reviews from the TSConf crowd!

Next, we got ourselves a charismatic emcee, Nick Nisi, who ended up showering the audience with a series of TypeScript jokes and haikus which led to the TypeScript roadmap addition to “Investigate error messages in haiku or iambic pentameter.” While the haikus got met with love, we’re not sure his proposed costume ideas would have been as welcome. Thankfully we talked him out of those, but we cannot promise he will be without a costume at the next TSConf. In the meantime, you can catch up with Nick at NEJS Conf, now in its third year and run by Nick and others in the NEJS community in Omaha, NE!

Last but not least, a community conference requires funding (and cool swag!), and we could not have done this without contributions from our generous sponsors. It’s not lost on OS developers that too many companies use open source software for free, but never give back to the communities that develop and maintain it. So here’s a big THANK YOU and SHOUT OUT to several companies who DO give back to open source through high quality code and community involvement!

And Then the Stars Aligned

With a call for papers and speaker selection occurring just weeks before the event, we’re going to have to chalk landing our star line-up to pure luck. The following speakers filled out our single track conference!

Anders Hejlsberg kicked things off with the keynote, giving his thoughts on the current state and future of TypeScript. Anders dazzled us with explaining some of the TypeScript 2.8 additions like conditional types, described the challenges of recursive typing, and how TypeScript only goes to about five turtles deep before it stops. Anders also reflected on how much things have changed since they first started working on TypeScript.

Josh Thomas (Ionic) explained how they built StencilJS with TypeScript, and some of the benefits TypeScript offered their project.

Sarah Higley (SitePen) gave a talk, “Escape the Office: Designing Interfaces for Other Developers,” which covered the topics of accessibility as well as how to create intuitive interfaces for other developers.

Rado Kirov and Bowen Ni (Google) explained how TypeScript at Google works, including their reliance on one massive mono-repository.

The final talk was delivered by Devon Zuegel (Bloom), speaking about Webpack and Ethereum Smart Contracts with TypeScript, two very different use cases that showed some of the versatility of using TypeScript.

The TalkScript Podcast hosted a Q&A session with members of the TypeScript team including Daniel Rosenwasser, Mohamed Hegazy, Ryan Cavanaugh and Anders Hejlsberg. Questions got answered, laughter ensued, and the team lost to TalkScript’s, Torrey Rice, in a quick round of Truthy Falsey.

Video production is complete and TSConf videos are now available!

Overall, we consider TSConf an amazing success, exceeding even our highest expectations. However, we can only take credit for bringing the community together. The real applause goes to the 220 TSConf attendees who brought their passion, expertise, and experience to this 1-day event that truly celebrated the greatness that is TypeScript and the open web.

Follow us on Twitter to be in the know about future TSConf events! See you next time!